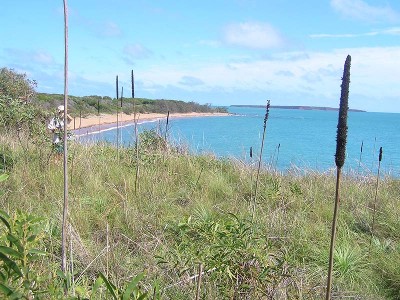 Avoid Island is part of a group of islands called the Flat Isles. It is situated approximately 100km south of Mackay and approximately 20km east of the mainland from Flaggy Rock, near Carmilla in Queensland, Australia. The island is situated 40 minutes by boat from the mainland and 25 minutes from Mackay airport by light plane. Avoid Island is about 1.6km long, with an average width of about 400m. The Island is generally flat to sloping, with an elevated rise to the residence at the northern end. Avoid Island has a 3 bedroom steel frame house (main with ensuite) with ceiling fans and air-conditioning. There are 2 x 6200L fibreglass rainwater tanks, solar power, a radio telephone tower and equipment. The Generator Shed is steel frame with concrete floor with a floorspace of 36m2 with a 4500L fibreglass rainwater tank attached. The shed contains a diesel engine powered 25KVA, 240 volt generator which powers the house via an underground cable, dinghy and a Kubota tractor/slasher. There is an airstrip on the Island and is about 800m long and is cleared, graded and grassed, with a windsock and is in good order and well maintained. The island has three sandy beaches on the eastern side and one long sandy beach on the western side which offers a shallow sheltered anchorage. Avoid Island is located in the Percy Group of Island adjoining the Great Barrier Reef Marine Park. The eastern beaches are critical sites for the endangered flatback turtle during the nesting season from November to early February. Under the Avoid Island Conservation Agreement no development or land uses are permitted that might be detrimental to turtles during nesting season. Tenure Leasehold for Residential Purposes only. Current term of the lease is for 50 years.